This program is free software: you can redistribute it and/or modify it under the terms of the GNU Affero General Public License as published by the Free Software Foundation, either version 3 of the License, or (at your option) any later version.

This program is distributed in the hope that it will be useful, but WITHOUT ANY WARRANTY; without even the implied warranty of MERCHANTABILITY or FITNESS FOR A PARTICULAR PURPOSE. See the GNU Affero General Public License for more details.

IMPORTANT: A NEW AND EASIER-TO-USE VERSION OF THIS TOOLBOX IN PYTHON IS AVAILABLE AT https://gitlab.ub.uni-bielefeld.de/bpaassen/python-edit-distances/

If you use this toolbox in academic work, please cite:

To use this software is recommended if

This toolbox is not the right tool for you if you want to do standard bulk computation of dynamic time warping on one-dimensional double sequences or simple string edit distances. In that case there are faster tools out there.

The TCS Alignment Toolbox can be directly used in your Matlab/Java-program as a .jar file or via maven.

The binary distribution of the full TCS Alignment Toolbox can be found here.

You can use it in Matlab using the command

The TCS Alignment Toolbox is available on maven central. For most standard cases it should suffice to declare the following dependencies:

The different modules are discussed in more detail in section Modules.

If you want to inspect the source code or compile the project yourself, you can either download the sources from maven, or check out the GIT repository using the command

You can also inspect the GIT repository in your browser: Link.

If you want to use the Toolbox as fast as possible it is recommended to use one of the code examples in the 'examples' directory and develop your application code from there on.

You can get a copy of the examples by cloning the GIT repository as described above.

If you want to apply the Toolbox in an educational datamining context, we suggest to have a look at our demo with graphical user interface as presented at the International Educational Datamining Conference.

The idea behind the toolbox is to enable alignments of arbitrary input sequences as well as metric learning on these alignments. We approach this problem by a clean software architecture. As input for alignments we use the Java List interface. As elements of the lists you can use arbitrary objects, as long as you provide a Comparator that works on such objects. A Comparator computes a distance between elements, which an AlignmentAlgorithm can then use to compute a distance on sequences of such elements.

For convenience, we provide several standard implementations of the Comparator interface (e.g. Euclidean distance, Manhattan-Distance, Normalized Compression Distance and Character Distances) as well as the AlignmentAlgorithm interface (edit distance and dynamic time warping), which can be found in the comparators-lib and the algorithms-lib package respectively.

Metric learning is possible using gradient descent schemes on the alignment distance. This kind of metric learning has been applied successfully in several publications.

The toolbox is build upon the powerful theoretical framework of Algebraic Dynamic Programming which provides a generic approach to compute a wide variety of alignment schemes efficiently. Our implementation of ADP enables the definition of custom alignment schemes as well (refer to the adp module).

In order to use the Toolbox, you'll need to execute (some of) the following steps:

Some code examples for Java and Matlab are listed in the 'examples' directory.

AlignmentAlgorithm implementations may differ in the underlying algorithm as well as the return value. In the algorithms-lib module we provide standard implementations for the classic edit distance as well as dynamic time warping. For each of those we provide a Score version which just returns the numeric score and a Full version which returns an Alignment object containing the actual Operation objects that correspond to the alignment distance. Therefore, if you want to compute the optimum Alignment according to a dynamic time warping distance, you should use the StrictDTWFullAlgorithm of the algorithms-lib module.

An entirely different view on co-optimal and suboptimal alignments is offered by the Soft alignment scheme, where we do not take the strict minimum of the possible distance but a soft minimum. his is a key feature to achieve robust metric learning results and is described in more detail in our papers (see Background)

To increase maintainability we do not provide standard implementations for each of these variations in the algorithms-lib module. Rather, we provide an abstract version in the adp module, which then can be applied to any algorithm of your liking.

In general, if you want to construct your own AlignmentAlgorithm implementations we recommend the adp module, which is built on Algebraic Dynamic Programming. This is explained in the adp example in the 'examples' directory and in more detail in the paper Adaptive structure metrics for automated feedback provision in intelligent tutoring systems.

It is a general result in algebraic dynamic programming that alignment algorithms have the same asymptotic runtime, namely O(m ⋅ n) where m is the length of the first and n is the length of the second input sequence. However, constant factors differ depending on the implementation. The most important rules of thumb are:

Also note that not only the choice of algorithm influences the runtime but also the runtime of your Comparator.

The following figures show the runtime for one alignment in seconds versus the sequence length for some example algorithms. The sequences were random strings generated over the alphabet {a, b, c, d}. More details on the evaluation can be found in the performance evaluation script in the 'performance' directory. 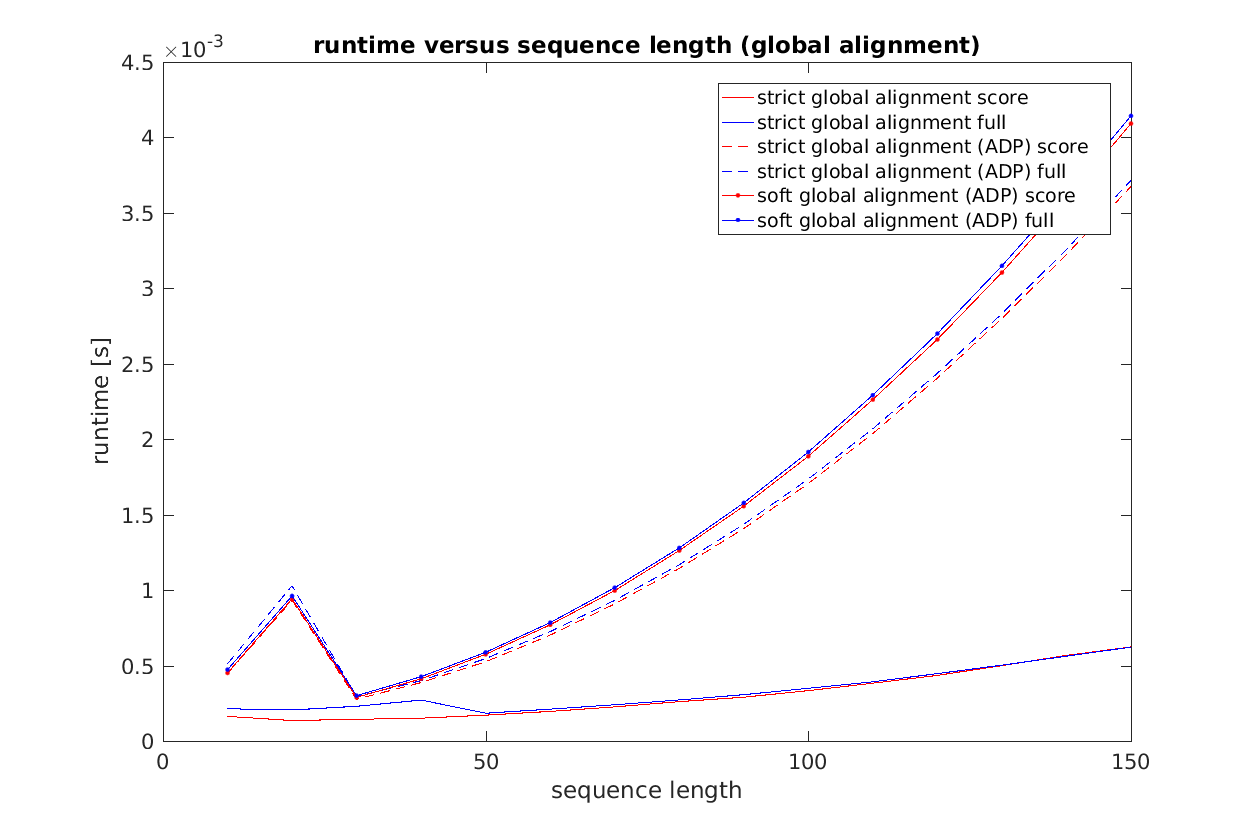 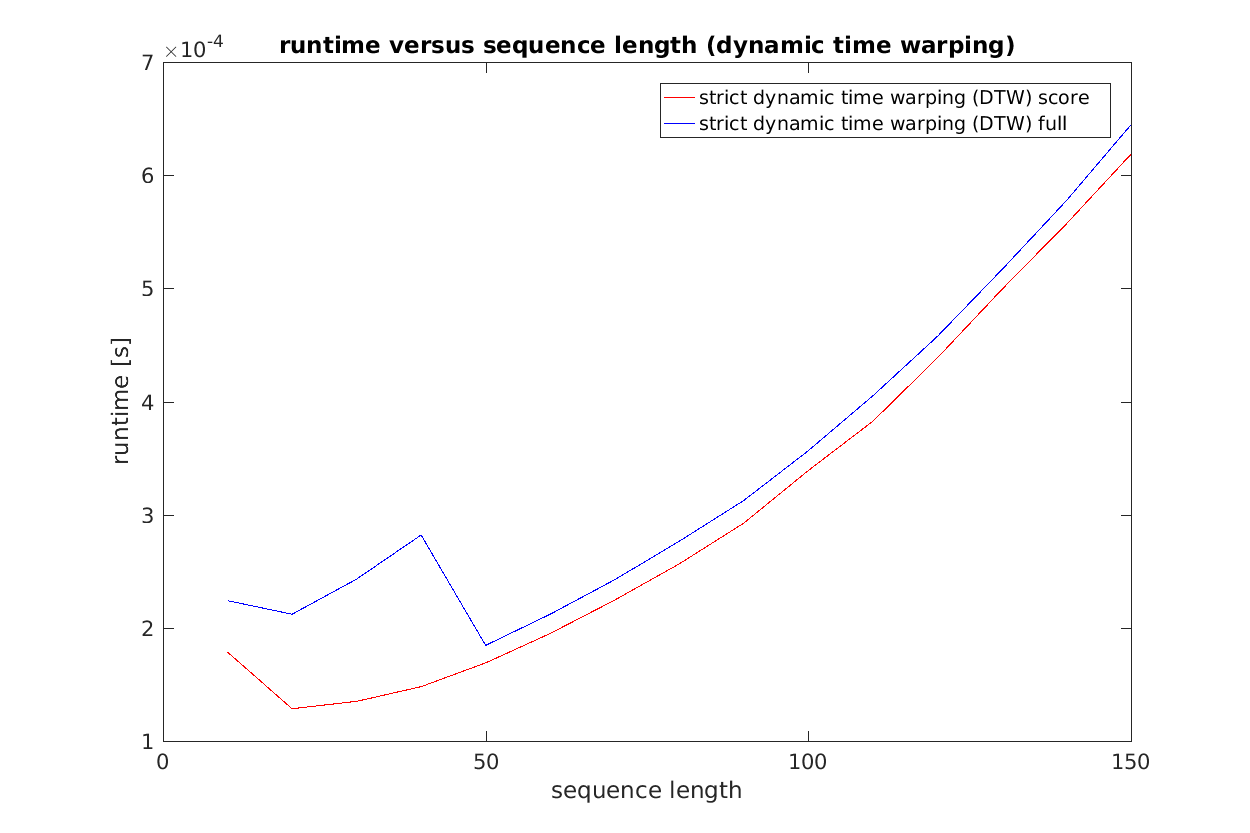 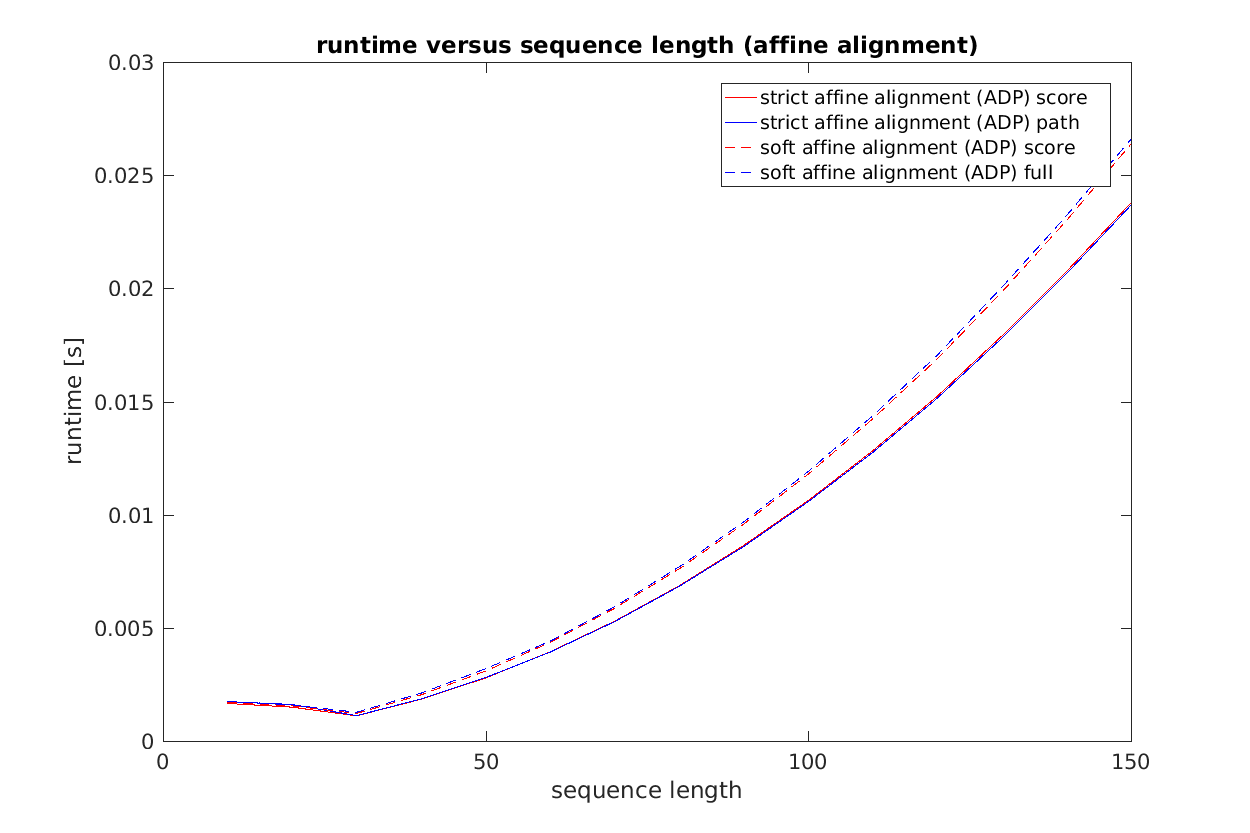 The following figure shows (for the case of the global alignment strict score algorithm) how much runtime can be saved by using parallel processing instead of iterative processing. All pairwise alignments where calculated for an ascending number of sequences. The sequence length was fixed to 50. 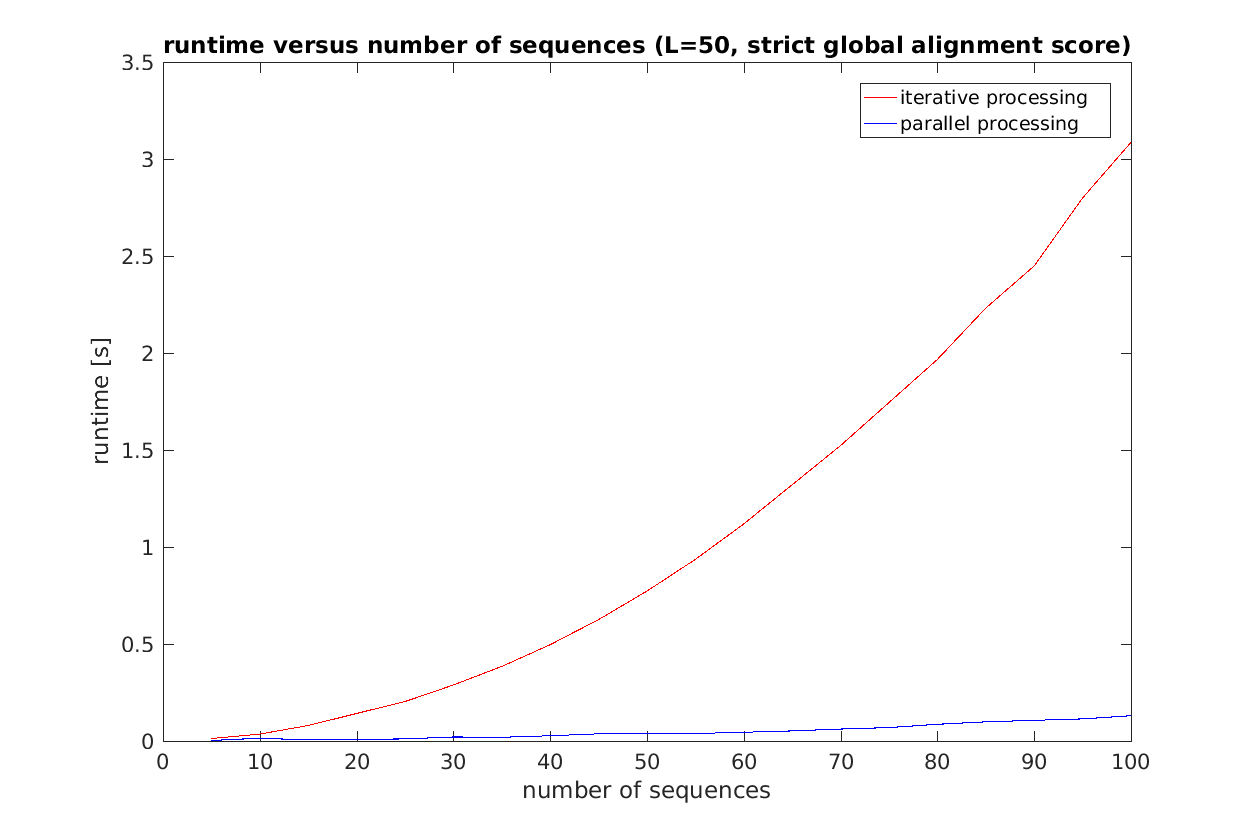 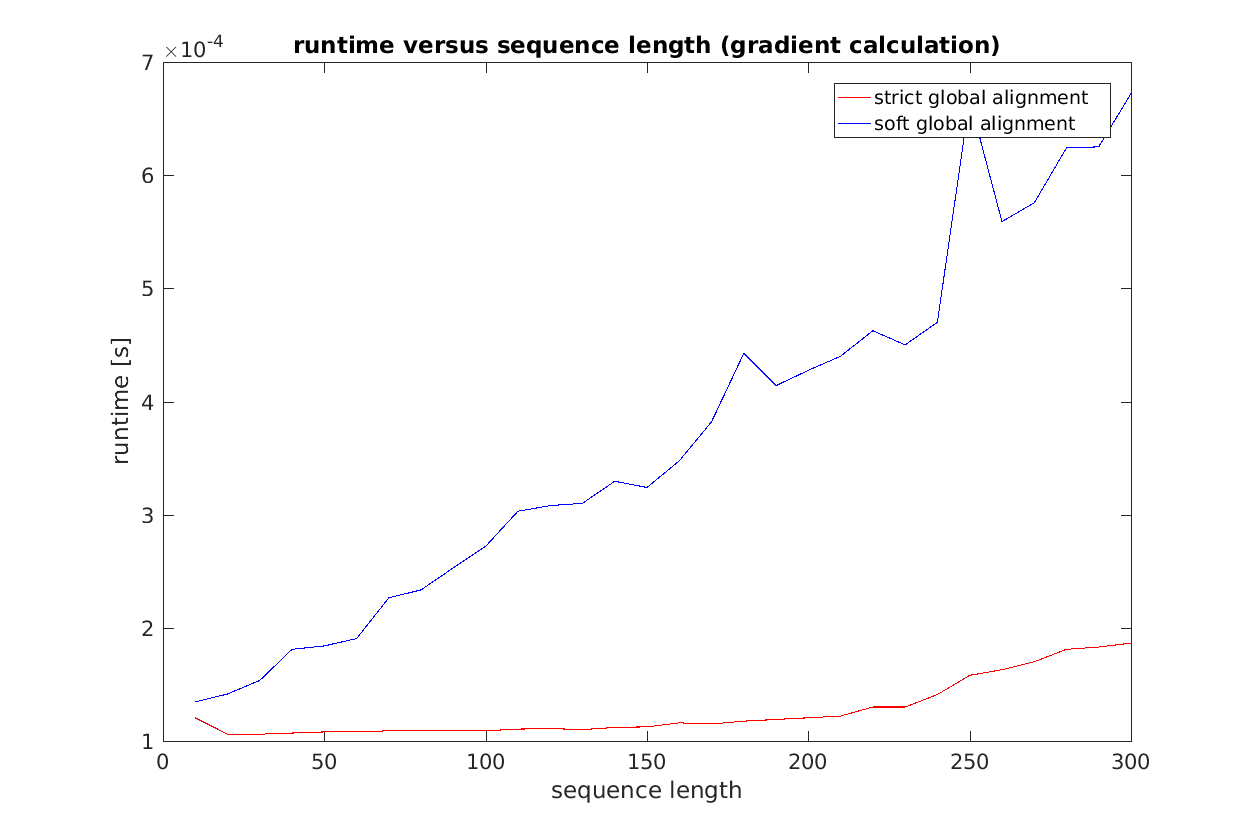 Further documentation on the TCS Alignment Toolbox can be found in

This Toolbox has been developed in 2013-2016 in the Theoretical Computer Science for Cognitive Systems Workgroup at the Centre of Excellence 'Cognitive Interaction Technology' (CITEC), Bielefeld University. Development is part of the research project 'Learning Dynamic Feedback for Intelligent Tutoring Systems' (DynaFIT), grant number HA 2719/6-2, which is part of the DFG priority program 'Autonomous Learning'.

If you use this toolbox in academic work, please cite:

We have published several articles using this toolbox, in particular for metric learning:

The toolbox is structured into several maven modules with different purposes. For practical applications it is ususally sufficient to declare the following dependencies:

The full dependency structure between modules is visualized in this UML diagram:

In more detail, the modules are:

The Sequence datastructure was mandatory in earlier versions of the TCS Alignment Toolbox and is built for multi-dimensional and multimodal sequences. It has been made fully compatible with the new toolbox version, but the use is not mandatory anymore and it is mainly kept to achieve backwards-compatibility.

As general utility library we employ lombok in all modules in accordance to the MIT License.

For the normalized compression distance (NCDComparator) in the comparators-lib module we use the fast LZ4 implementation by jpountz. Our use is in accordance with the Apache License, Version 2.

For the export and import of NodeSpecifications in the csv module, we employ the JSON reference implementation of Douglas Crockford according to the JSON License.

The TCSAlignmentToolbox is licensed under the AGPLv3. The full license text can be found here.

This documentation is licensed under the conditions of the Creative Commons Attribution Share-Alike International License 4.0.